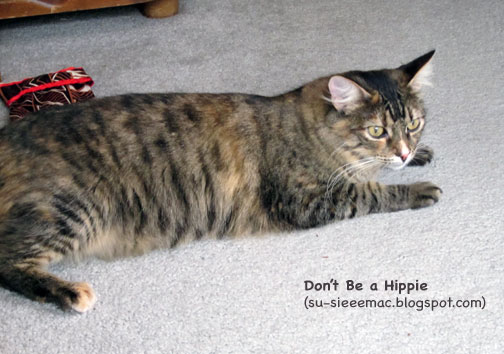 "Hey, Kid, your people are looking for you," said Lickity Split, as he sped by me. I barely got onto the sidewalk when he turned the corner. There was no use following him. All afternoon I had been following him to no avail. Just as I caught up to him, he jumped onto a fence and climbed over it into the unknown.

I scooted back into my hiding place. Everything was fine and dandy when I first got outside. But it had gotten dark and cold. I had no idea where I lived. I should've marked my trail as I walked away.

If I was home right now I would be playing with the orange string that the tall hairy human likes to dangle in my face. Then after awhile the human who feeds us would put a bowl of food on my tray.  Sigh. Lickity Split said he would show me where to find food if I didn't go home tonight. Will he come back? I wondered.

"You've got it made, Kid," he said to me when we first met that afternoon. He was the reason I wanted to come out. I had to talk to him. To let him know I lived in the house. But, also to ask him what it was like to live outside. Except for that one time brother and I lived with that horrible couple, I've always lived indoors. And with other cats and dogs.

"I don't think you'd like my kind of life," Lickity Split said. Off he went. He didn't like to stay in one spot for long. He said, "You snooze, you lose." I had no idea what he meant.

It was nice living in a place where I'm the only beast. I liked being the center of those  humans' worlds. Those three humans were nice, even that tiny one who smells like cigarettes. They pet me. They played with me. They gave me delicious food and water. They let me sleep on their soft bed. Sigh.

What was that? It sounded like the noise of the yellow box that holds my dry food.

"Molly! Molly!" That sounded like the human who feeds us.

"Molly is that you?" I looked up at a huge creature. It sounded like her, but I couldn't tell from behind the shrub.

"Come on, Molly. Let's go home." She put her hand on me. I resisted. She pulled me towards her, dragging part of my body on the ground. That hurt. She picked me up and carried me from my hiding spot. I tried to squirm out of her arms, but she held tighter. She walked quickly across grass, calling out to someone, "Hurry, hurry, open the door."

A door opened. I jumped out of her arms. I ran into a lit room where a television blared. The tiny human sat on the couch. The tall hairy human stood behind me. They both sounded happy when they said, "Molly! You're home!"

Honestly, I didn't think I would ever see them again. I was ever so grateful to be home, especially when I looked out the window this morning and saw that the world outside was wet.