Five Things About the Mama 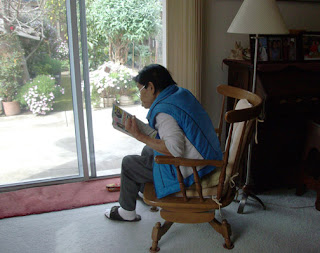 The Mama is the other significant character who will grace this blog from time to time. Here's a look into her nature.

"They ask how old I am!" the Mama exclaims. Sometimes she says it out of the blue, a few hours after having come from a party. Or, it may come a day to two later, after she has finally let the question get to her. The question that she thinks is so rude to ask: "How old are you now?" Her standard answer, "I am 100 years old."After asking her age, they (the people who haven't seen her in awhile) then want to know how she stays so healthy (translation: not dead).  Her answer, which I'm really not sure she says so sincerely: "I eat rice. Rice does not make your face wrinkle."

The Mama reads the newspaper daily, as well as listen to the evening news, and sometimes the noon news. "They showed Goodrich (Gingrich). He was crying," she said, with a note of of amusement. "I have never seen a politician cry."

Once upon a time, soon after the Daddy died, the Mama took in two boarders, two middle-aged women—sisters, I believe—who  had recently moved from the Philippines. The women happened to be religious, meaning they were really into their church, which was not Roman Catholic. The Mama has not ever been a churchgoer, but that does not mean she is (or was) anything other than a Roman Catholic. From what the Mama had told me, the two women and she got into a very arousing argument about religion. The two women moved out the next day. "I may not have education," the Mama had said. "But, you cannot fool me." In other words, she believes in what she believes. Don't even think about trying to change her.

The Mama's favorite movies are Sound of Music, Pollyanna (with Haley Mills), and The Prince and Me. Oh, and how can I forget Cinderella—the version with Brandy and the Filipino guy as the Prince. I can count on the Mama requesting to watch at least one of these movies almost every week. Lately, she falls asleep on them; but, I'm sure it's after she has seen her favorite scenes. With the Sound of Music, she likes the part where Maria and the Captain are dancing in the garden and afterwards, the Captain's gal, the Countess, makes a snide remark. "She's jealous," the Mama murmurs with a satisfied glee.

The Mama loves to garden, and that she does almost every day.

the mama
Labels: the mama