Finding the Funny in B for Bleeding

Definitely not to be taken lightly.

Postmenopausal bleeding, in particular, for us mature ladies.

Still, there's some humor to be found. Hold that thought. 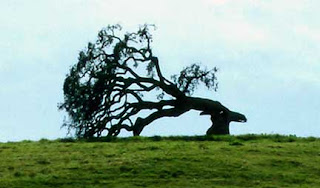 Serious stuff first: The medical experts say that postmenopausal bleeding refers to any bleeding (light or heavy) occurring after one full year of no flow. There could be various reasons that a post-menopausal woman may suddenly start bleeding, from benign cervical polyps to yuck! cancer. So, dear ladies, you know who you are, do not hesitate, do not pass Go. Make an appointment to see your gynecologist tout de suite.

Okay, back to that held thought. Humor.

Let me take you back to 2006. Then was my first bout with postmenopausal bleeding. Lady-Doc (and my gynecologist is a she) found a rather huge, very ugly hot potato of a polyp. She twisted that baby off and sent it to the lab. Ladies, the things our gynecologists must see and do. They're well worth the money. Fortunately, Lab-Doc decreed the polyp as benign. However, Lady-Doc told me that I may get more over the years because essentially I have the physical conditions to be at risk for them.  Lab-Doc also diagnosed that I had something called atypical hyperplasia, which also contributed to my case of postmenopausal bleeding.

Hey! you say. Where's the funny in that?

When that all happened, I was 52. I had never used birth control pills until then.

I hear you. What's birth control pills got to do with postmenopausal bleeding?

In my own words—don't quote me, please—birth control pills control estrogen. That was one, perhaps the only way other than a hysterectomy, to stop that hyperplasia from possibly developing into yuck! cancer.

So, anyway, the funny stuff: The pharmacy was very busy the day that I went to pick up my birth control pills. Four pharmacy aides worked the counter, including a young man who had started a few weeks before. I was hoping I'd get one of the women who were around my age. Of course not.

The young man took my name and went searching for my prescription. I watched him do the rounds at each station where they might be. The second time he went into the drawer where my prescription should've been and pulled out the same prescription I'd seen him pull out before, he asked me, "Is the prescription under someone else's name?"

"No. Whose do you have there?"

He called out the brother's name. Hmm, maybe. I asked, "What's the prescription for?"

Bingo. It was my prescription.

"That's it," I said. "He's my older brother. Someone must've confused our accounts."

The young man looked at me unsurely.

The young man still hesitated. It could've been the grey hair sprouting from my head that confused him. Why would an old lady need birth control pills? That was for me to know. So, I repeated my logic. Second time must've made sense to him. He took the pills and went back to talk to a pharmacist to sort it all out.

And that, dear readers, is how this postmenopausal woman got her first batch of birth control pills.

P.S. I only had to use the birth control pills for several months. The hyperplasia condition went away. More than a year later, Lady-Doc twisted off another benign polyp. Fast forward to last week.  Bleeding. I figured it was a burst polyp. Knock on wood, that is all it is. I ought to know soon.

P.P.S. If you would like to read some easy-to-understand medical explanation about postmenopausal bleeding, in general, check out this link.