Result: The All Things Alcott Challenge 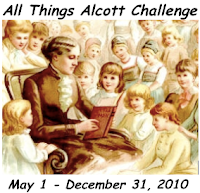 Back in November, I signed up for the All Things Alcott Challenge.  Because it was during the last six weeks on the challenge, my goal would be to read one book by or about Louisa May Alcott. I'm sorry to say that I didn't make my objective.  I read the Wikipedia article about Ms. Alcott's life and read one short story, "An Old-Fashioned Thanksgiving."

The Wikipedia article about Ms. Alcott is a great introduction to her fascinating life.  Here are five facts about her:
Some of Ms. Alcott's works can be read for free online. You can find "An Old-Fashioned Thanksgiving" here.  I am amazed that I hadn't ever read it before. It's the kind of old-fashioned story that should've made it into the elementary school textbooks that I read for English classes.

"An Old-Fashioned Thanksgiving" was  a delightful story about a poor family who made do gratefully with what they had and dropped everything to take care of important matters. The story opens with the mother and her children preparing pies and such for the next day's Thanksgiving meal. Then word comes that the mother's mother has taken deathly ill. She and the father head off immediately, leaving the two older children, in their early teens, in charge of the six younger ones. The next day, the children decide to go ahead and make the Thanksgiving meal so that it's ready for their father when he returns home. Never having cooked a fancy meal on their own is the challenge. Also weaved into the tale is a bit of fright in the form of a bear. The ending is a surprise for everyone in the story, and for the reader.