Why so late? Because I stayed up to 4 a.m. doing some gratis work for my high school class alumni scholarship fundraiser, and okay, I kept falling asleep on the documentary The Botany of Desire

. (P.S. If you click that link, it will take you to Amazon. Just saying.) The parts I did see were quite interesting.

Did you know that apples originated in Borat land, and that Johnny Appleseed dressed like a beggar but was some smart cookie of a business guy, and that the first apples in America were too sour to eat but perfect mash for getting drunk?

I also woke up to learn a bit about marijuana. Naturally, it can grow to seven feet or more. I didn't know that. Because folks have been furtively growing marijuana indoors, a new species was created so that the plant doesn't grow as high and that the stuff that makes folks get all happy-loopy is more intense. Something else I didn't know. The most interesting fact was that some experts call marijuana the drug that helps tokers "forget"  bad things that happened or are happening in their lives. Hmmm. That could be why I sought the drug after my dad died and after my first husband died. It did help me through the initial pain of grief. The documentary also discussed tulips and potatoes, but I slept through those segments. 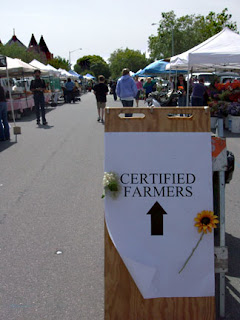 I'm thinking this moment, as I'm writing, that my sleepiness  last night (the night before) may have been the result of drinking a pint of lager; helping two young gals push their car down half a block of main street and up another half a block into a parking lot; and eating two Russian teacake cookies and a bowl of fruit salad made of fresh strawberries, peaches, and apricots, which were all bought at the farmers market. Now that's what I call a long sentence. I wonder if it is a run-on sentence. Anyone care to tell me?

Yeah, yesterday (the day before) was a one-of-a-kind day for the husband and me. Going to the pub was a spontaneous thing. It whispered across the street to us after we walked through the farmers market that we really wanted a beer. So, we went and perched at the bar and contentedly sipped lagers and ate jalapeno poppers. I enjoyed listening to the guys nearby talking about Hollywood all storied out because they're producing too many remakes. One guy shook his head sadly as he mentioned "Cool Hand Luke." Well, maybe I wouldn't mind seeing Gerard Butler in the part.

As we sallied out of the pub, I noticed a woman walking in the street pushing a car. "We ran out of gas," she said when I asked what was wrong. Of course I had to step into the street. I recall a few times of being young and running out of gas in the middle of a busy intersection. Strangers came from no where to help me push my car to the side. Unlike my then light box of a car, theirs was one heavy mother of a sedan. "You're lucky we're full of beer," I told the young woman as the husband and I bore down against the car next to her.

When we turned the corner, the husband sped off like a jack rabbit pushing that car along. What got into him? Okay, maybe it was the fact that we were in the middle of the street and he didn't want the cars behind us to be inconvenienced. He's so conscientious. Once the husband got going, I wasn't able to keep up. The young woman also dropped out, probably from the combination that she was also out of shape and her pants were falling down. 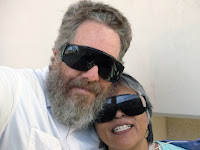 And, you know what? As I'm writing, I realize that I can't remember if those women even thanked us for our help. But then, it could've been that we just walked away after all was pushed and done. We were so jazzed because we, the husband and I, still have it in us to spontaneously help push a car in distress. I'm wondering, though if I've officially become a fuddy-duddy about this young generation. I also experienced the solicitation an hour later.

Now, this post is what I call a ramble of nonsequiturs. A racing one at that because today (yesterday) is coffee day. I let myself drink one-and-a-half cups of delicious Peet's coffee. Black and strong, the only way to drink coffee. I've been off coffee for a few months because I'm trying to determine if caffeine  triggers my eczema. Truthfully, I can't tell. But I do know it triggers the brain cells that gets me happily rambling about this and that, here and there, now, sometimes then.

One more thing, dear gentle readers. I'm dedicating this post to Tara at Two Hands and a Roadmap. The coffee I've drunk today (yesterday) may be a catalyst, but her ease of talking and writing in her blog has reinvigorated me to have fun with writing again. You'll be in for a treat next Tuesday when Tara does a guest stint here.