April showers bring May flowers. I hope so.

On Saturday, I sprinkled a large bag and a half of random seeds (over 8,000 seeds) amid the mama's organized flower beds. She said I could, even after I said some of the flowers may be vines. 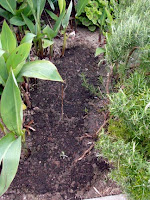 Messy yards drive her nuts. She curses the leaves of other trees in the neighborhood that end up in her backyard, as she sweeps, picks, and deposits them into the green recycling bin almost every day.  In the fall, the mama clucks at front yards full of dead leaves. "If that was my yard," she would say, "I would get rid of that tree." And, if a neighbor happens to annoy her at the moment, she mumbles about the weeds in his or her yard, but only I would be able hear or understand what she is saying.

Why then did the mama allow me to shake seeds throughout her orderly garden? There was a starry far-away look in her eyes at the mention of four-o'clock flowers. I think, though, it's mostly because she has a strong sense of curiosity, especially when it comes to seeds. Will they grow? What will sprout? If she likes the results, can she gather enough seeds to grow them again elsewhere in her yard? 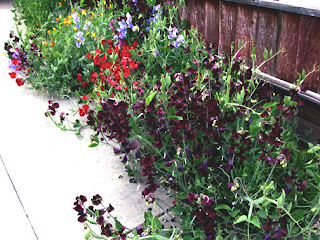 During the first year of the husband and I living here, the mama let me sow wildflower, sweet pea, morning glory, and sunflower seeds in the barren parts of her front and back yards. Six years later, California poppies and sweet peas still come out on their own, and the mama plants descendants of those first sunflower seeds for sprouts for us to eat as well as for tall bursts of yellow to bloom. As for the morning glory, she tore them all out after the third year. They were pretty, but too messy.

So, we'll see how this batch of flowers will fare, especially the four o'clock vines, as they clamber up established shrubs and sturdy plants. No, it won't bother me if the mama decides to pull out the messy looking ones. As the saying goes, nothing ventured, nothing gained.