I like to keep a bunch of rocks nearby when I paint so that I can use up any leftover paint on them. Wouldn't it be funny if the rocks in the yard seek hidey holes because they dread the thought of being splashed with clothing? Now that would make for an interesting story. Be my guest.

This afternoon I happened to notice the various faces of a green painted rock. A different story on every face. These are only four of its faces out of eight, possibly 10 or more. What stories do you see? 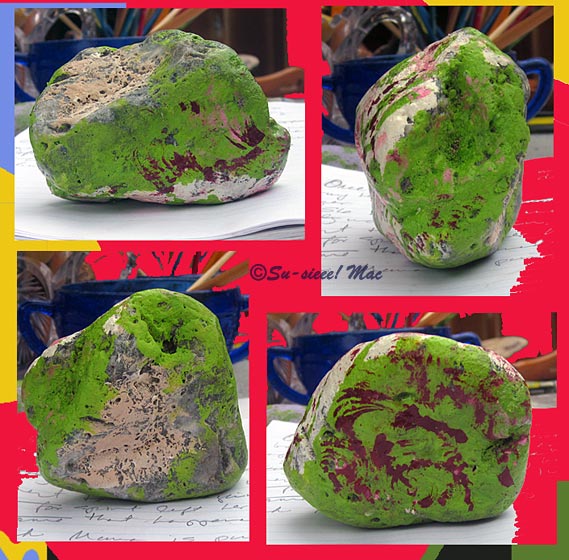 On Mondays, when I can, I like to participate in Angie's Mosaic Monday at Letting Go of the Bay Leaf. Come check out the other bloggers with me.

By the way, here's what happened at last week's City Council meeting that I was in a hurry to check out live on TV: The Council voted 3-1 to disregard the mayor's appeal to stop the construction of a project to build condos on top of retail stores and another building to house nonprofit organizations on a downtown lot that has been empty for 30 years. The original shops and businesses on that space were torn down because of damage from the Loma Prieta Earthquake. The mayor had to recuse himself from last Monday's vote due to a financial conflict of interest; he owns the historical building next to the  project. In short, he has been trying to stop the project for the past several years. His next step is to sue the City like he has been threatening.