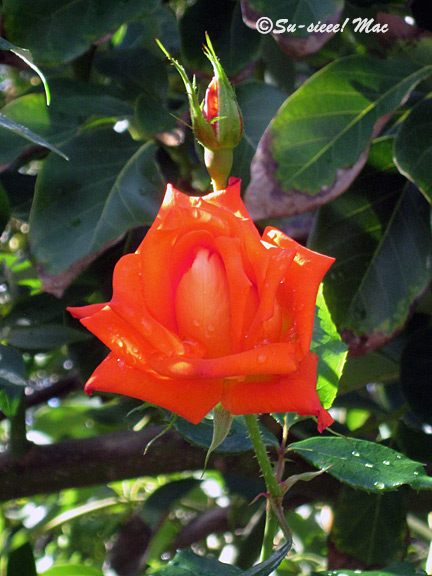 My left knee is growing stiffer by the second, as are my shoulders and hands. I'm fine with that. I accomplished my goal today before it started raining. For about four hours I've been digging holes by the back fence for roses which I transplanted from pots  (the orange roses, for instance) and from the middle of the banana plants. I've always wondered what the Mama had planted first, the banana plants or the roses.

All the transplanted roses began as cuttings that the Mama stuck in the dirt. Whenever she trimmed her roses, she'd propagate a few branches, so who knows what generation the roses are that I stuck into the ground today. If you're interested, here's an old post about the Mama's roses.

I also have a bucket of rose cuttings, which, if my body doesn't protest and it's not raining too awfully much, I'll put them into the ground tomorrow. Rose cuttings don't grow for me in pots. Mostly because I forget they're there. Unlike the Mama, flowers have a better chance of living if they're in the ground. We shall see if that includes roses. Now, it's time for me to ice my knee and think about making Cream of Mushroom soup for dinner.