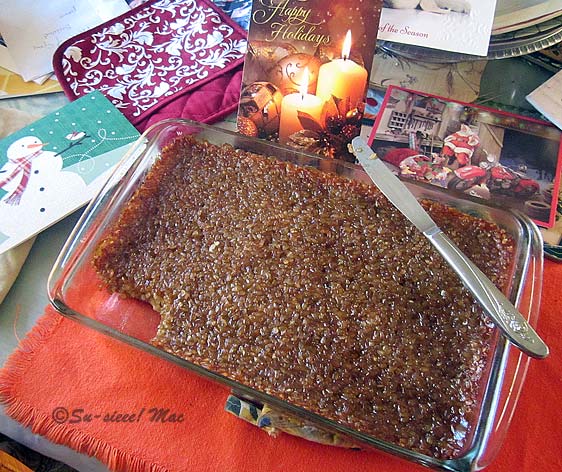 Suman is my all-time favorite Filipino dessert that the Mama made during the Christmas season when I was a kid. It is a decadent sweet rice concoction made from sticky rice (aka glutinous rice and sweet rice), brown sugar, and coconut milk.

The delightfulness about suman is the memory of it being made, usually on a cold, rainy day. I'm anywhere from age four to seven. The Daddy cracks open two or three coconuts, pouring the juice into a waiting glass. I have yet to taste coconut water as good as what I drank way back when.

The Daddy scrapes the coconut meat from the shell carefully and precisely on a a flat, round serrated scraper that he attached to a thick chunk of wood that he straddled. "I want to do it," I say every so often, as I watch the coconut transform into tiny slips of whiteness as it falls from the scraper into a large white metal basin with red trim. Eventually the parents let me sit on the homemade coconut scraper and try for a short bit. It is not easy, and frustrating, as I scrape chunks rather than delicateness from the coconut.

The Mama takes the full basin of grated coconut and somehow turns it into coconut milk with a lot of water and repeated hand wringing of the grated coconut. Then the Mama puts a big pot of sticky rice to cook on the stove. Does it have coconut milk in it? I can't recall. I leave the kitchen after I sample the coconut milk, which is not as tasty as the coconut water. The next thing I know, the Mama sets pans of baked suman on the table.  The smell is heavenly. Mmmmmmm.

In my early 30s, I decided one Christmas to make suman for the first time. From memory. My suman was tooth-meltingly sweet but hard as brick, especially when it cooled. That was the last time I made suman.

Two weeks ago I came a across a bin of organic glutinous rice which triggered a desire for the Mama's suman so I purchased enough to cook in a small rice cooker. Instead of making the dessert from what I think the Mama did, I searched for an Ilocano recipe on Google.

Ha! suman does not have loads of butter in it, which was what made my heavy-as-a-brick concoction. Butter is used, but only for greasing the baking pans. Also, you make a sauce out of coconut milk and brown sugar, stir half of the sauce into the rice, then pour the rest over the sweet rice once it's in the baking pan.

My suman didn't taste as sweet or as awesome as the Mama's, but I am pleased with the result. I modified the recipe using far less brown sugar and adding about half-a-cup of Kahlua to the canned coconut milk.  I didn't use all of the sauce. If I remember today, I'll put the remainder in the freezer, just like what the Mama did with her leftover grated coconut and didn't ever use again.