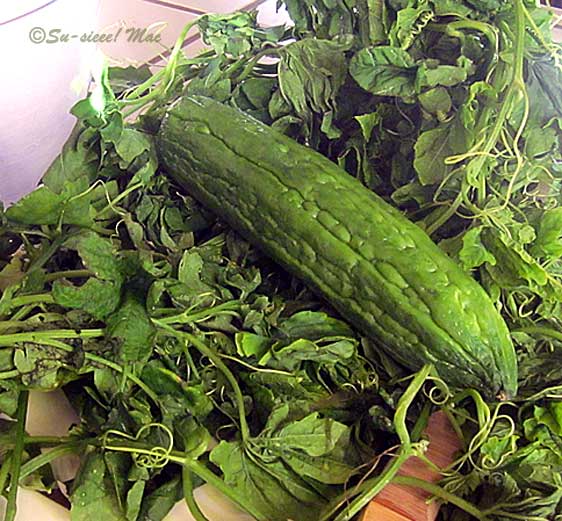 The day before we stopped at a Filipino market in Watsonville and almost immediately saying hello to me was a display of bittermelon (parria to me) and bittermelon leaves. I've been craving bittermelon for the last several months. Unless I grow it, we have to travel far and almost wide to purchase the vegetable.

The Daddy and the Mama grew bittermelon in their vegetable garden every summer. When I was a kid the Mama made chicken bittermelon soup at least once a week. Slurp, slurp. It wasn't until the Mama was 90 or so that I finally paid attention to how she made it.

Wash and drain the chicken in the cooking pot, then steam the chicken (no additional water yet) with ginger and garlic (how much is your choice). At that magical moment (just before the chicken skin burns in the pot) pour water to cover the chicken and then-some. Put the lid on the pot and step away from the stove. Let the concoction simmer until you think you smell chicken in the air. Now is the time to add the chopped bittermelon if you have it. Let the soup simmer for about five minutes, then add the bittermelon leaves. Cook until the leaves are tender, perhaps another five minutes.

The Husband doesn't like bittermelon. Much too bitter for him. More for me, I say.