Looking for a Fight? 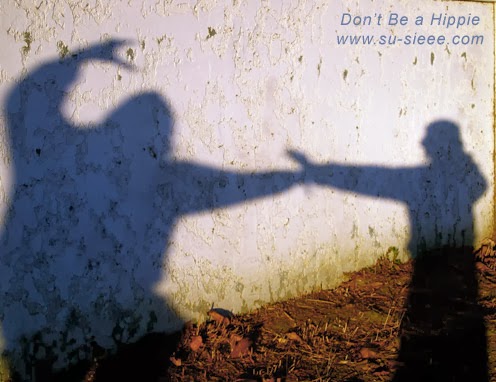 Warning: This is a grumpy story that happened this past summer in front of one of my happy places. The encounter did not sour me on continuing my visits, but for a moment after the event I felt like what's the use of living when people like that guy we met is alive.

I was parallel parking into a tight spot in front of the library where a whole lot of children and their parents were lined up in front of the bookmobile. The kids were signing up for a how-many-books-do-I-want-to-read-this-summer type of program. The car in front of me hung over its rear parking mark and the car behind me was nearly up to its front parking mark. As I turned off the engine, the Husband and I heard a very angry "HEY!"

We looked over to see a man standing against the building, his arms crossed, glaring at us. "Are you talking to us?" the Husband asked.

"You hit my car!" the middle-aged man shouted.

I peered around the Husband. "Excuse me. Are you saying I hit your car?"

The Husband and I got out of the car. The Husband and the guy started arguing. "Calm down," I said to both of them. I looked at his front bumper. "I did not hit your car. Look, there's nothing there."

Still in angry mode, the guy said, "There doesn't have to be anything there just because you hit my car."

Huh?  I could have lightly touched it, but I didn't think so. I was within inches of his car and to his eyes I hit it.

"I'm sorry. But I did not hit your car." (Why do I always apologize for something I didn't do.) I noticed that our car hung over the parking mark, so I went back into the car to move it forward a bit. When I got out of the car again, the man was still angrily whining about his car being hit. The Husband continually repeated firmly, "We didn't hit your car."

"What do you want?" asked the Husband and me in unison. I added, "Do you want my arm?"

The man rushed away into the crowd of children and parents who didn't seem to have paid attention to us, thank goodness.

The Husband and I walked into the library. When I said I wanted to look around, the Husband said he would wait for me outside. Later he told me it was to make sure that man didn't try anything stupid. I found the Husband standing with one of the library technicians, both watching the man go hurriedly back to his car and get in. Not wanting another confrontation, the Husband and I waited until he sped away, which was within seconds.

"He didn't look disabled to me," said the Husband. "I didn't see any placard on his dashboard."

"He had a disabled license plate," I said. "He could have a disability not visible, or maybe it's for someone else in his family."

The Husband thought the guy was gunning for a fight.

The guy didn't have a new car, although it was much newer than ours. It wasn't shiny and polished from hours of love and care, but it was less dusty and grimy than our old fart of a car. He was probably 15 to 20 years younger than us, which was to our advantage if he was one who simply has to strike out at people who he thinks offended him.

I have to wonder what was he going to do? Hit an old man and an old woman. If he didn't have an audience of children and parents, I wouldn't put it pass him. For that, I am grateful, considering what horror could have happened.