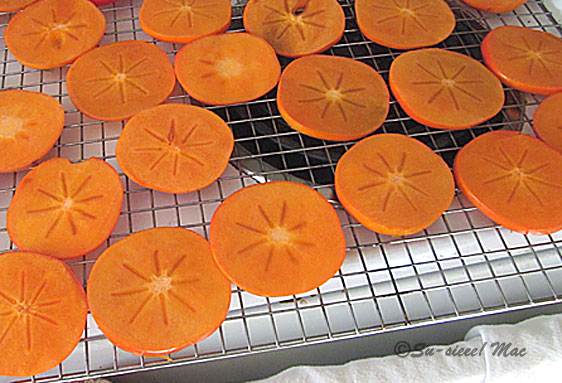 Once upon a time the Husband and the Mama each bought me a simple dehydrator for Christmas. The Mama let me choose my present from her, while the Husband said, "Surprise!" I'm spoiled rotten, I tell you.

Yes, I returned one dehydrator.

As for the kept dehydrator, I experimented with it once. The dehydrator was nothing more than five plastic trays sitting on top of a plastic base that has a heating element in it. Both the Mama and I agreed that it took a lot of hours to dry a handful of fruit. Not to say I had to interrupt whatever I was doing to rotate the trays every two hours. After that one time I cleaned the trays and put everything back into its box.

On Sunday, I decided that I wanted to dry some persimmons so I brought out the dehydrator. Instructions stated that it would take at least 24 hours to dry the fruit, which I figure would be about five or six persimmons. I didn't like the idea of the flimsy-looking machine being on while we slept. Besides I would need to get up to rotate the trays every two hours. What a baby of a machine!

Martha Stewart saved my day! Should I say night?

I found a Martha Stewart recipe for dehydrating persimmons in the oven. Place thinly sliced persimmons on a wire rack over a cookie pan. Bake for two to two-and-a-half hours at 250 degrees. I was able to fit five persimmons worth of slices on the rack. Ha!

Some slices came out slightly burnt, having the texture of potato chips. They tasted okay. Other slices came out orange and rubbery. They tasted even better. With more experimenting, I'll eventually find the right oven temperature, time in the oven, and slice thickness to get dehydrated persimmons that look like the ones you buy in the store.

That dehydrator? I might put it out in a yard sale or repurpose it into succulent planters.