Moving a Bookcase in Six Steps 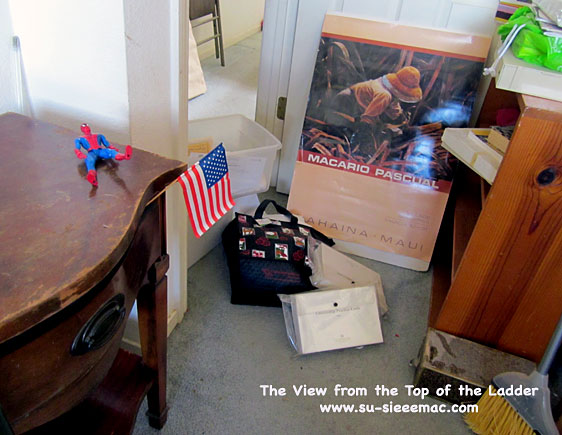 I'm not talking about what's going on in our country. My chaos is personal and oh so mundane, but real: The chaos I create when I want to move one thing. Just one lousy thing. Doesn't matter what it is, a lamp, a table, a bookcase, or a box of research. To move one thing requires moving a lot of other stuff—before, during, and after moving that one thing.

This morning I wanted to move a short, almost empty bookcase from its temporary spot against the wall to a permanent place alongside my desk. A matter of three feet, if that.

Step One: Move the bookcase and various piles of paper files, books, and boxes from beneath my desk and the other side of it to whatever surface is available and not in the path of moving objects.

Step Two: Remove the floor lamp from the side of the desk to wherever it's not in the way.

Step Three: Nudge little by little the desk (a sturdy pine kitchen table, so somewhat nudgable) more towards the wall.

Step Four: Remove the odd-size boxes from where the bookcase shall go.

Step Five: Take the bulletin board off the wall from behind the door.

Intermission:  Oh-Oh. The Husband and I won't be able to close and open the office door if I place the bookcase against the side of the desk. So I try other configurations. No. No. And, No. Sigh.

Step Six: Decide that we don't need to close the office door, and put the bookcase where I originally wanted it.

Seconds later, the Husband peeked into the office.

"Oh, you moved the bookcase," said the Husband. "That's good. Will we be able to open the door?"

"I think your little table will fit perfectly here," I said, nodding at the empty space where once temporarily stood the bookcase.

"Sure," said the Husband, but not with that much enthusiasm. "Do you want me to move it now?"

"When you have the chance today."

Meoooow. Molly the Cat sniffed her way into the office. The girl hasn't bounced her way up the stairs before breakfast in weeks. Curious to all the noise and chatter of the humans, she was.

The Husband cleared stuff from the little table, lifted it from the top of the file cabinet, and carried it to its new space in the office. Yes, it definitely looked perfect there.

"Anything else?" asked the Husband.

"Maybe after breakfast," I answered, thinking about a dresser that I want moved downstairs. Sigh.

The Husband glanced at the door now kept open by the bookcase. "Will we ever need to close the door?. . . I guess not."

Today's hook up is with All Seasons, hosted by Jesh at Artworks from JeshSTG. Click here to check out other participants and/or to join in.