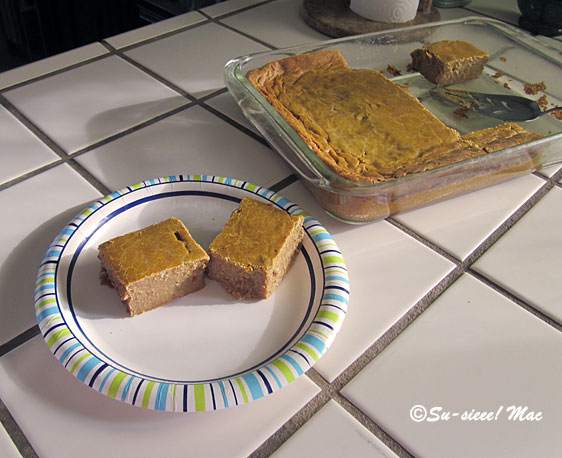 "I'm going to make bibingka," I said on Christmas morning.

"Do you know how to make bibingka?" asked the Husband.

The Husband forgot that I've baked this Filipino dessert a few times before. Of course it was easy for him to forget since the Mama liked to make this cake treat nearly every Christmas and for any day she deemed special.  I don't know if I'll carry on the Mama's annual holiday tradition. It simply felt good to have some kind of warm sweetness enveloping the house on Christmas morning.

The tradition I will carry on is the Mama's like to experiment with recipes. I read a recipe for pumpkin mochi which I thought would translate quite well into pumpkin bibingka. Both recipes use sweet rice flour rather than wheat flour. Instead of condensed milk, I used a combination of coconut milk and lactose-free whole milk. I'd give you the recipe but I modified it as I was going and you know how that goes.

The result turned out pretty yummy. Not too sweet since I cut the sugar by a third.  I was surprised that the pudding-texture of the cake came out almost like the Mama's, which means I may have approximated the secret ratio of liquid to dry ingredients that the Mama used. Nearly every Filipino woman has her own unique take on bibingka once she has mastered the basic recipe.

"It's like pumpkin pie without the crust," said the Husband.

I think the Mama would've liked it, too.

Y is the letter for this week's ABC Wednesday, a weekly meme that has been around for 10 years. Thank you, ABCW team!  Want to join or check out the participants? Then click here.