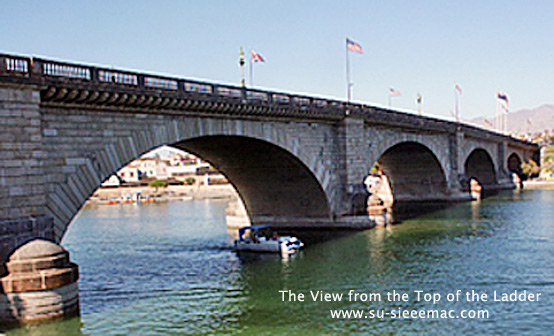 In first grade, we sang this Mother Goose rhyme as we marched under an arch formed by the joined hands of two kids. The hands came down on "My Fair Lady" and the two kids would then rock the captured kid between their locked hands, as we sang a verse about taking the key and locking the kid up. When that verse was over, either the captured kid chose a side and stood behind that kid or took that kid's place, after which, we marched and sang the rhyme again.

I don't remember what the point of the game was. For that matter, what the rhyme was all about. After three or four rounds, I would look longingly at the playground, even willing to climb up the jungle gym. And, that I disliked to do.

I didn't become curious about the London Bridge until 1975 when I learned that a rich American had bought the bridge and reconstructed it brick by brick on Lake Havasu in Arizona. A friend and I were driving cross country at the time and hoped to see it, but we ended in the wrong place. Bummer.

In 2007, I finally saw the London Bridge when the Husband and I did a road trip to the southwest. The bridge is gorgeous, no doubt about it. I was thrilled to see the once-upon-time bridge that spanned the Thames River. Seeing this European bridge in a desert setting though was quite surreal. 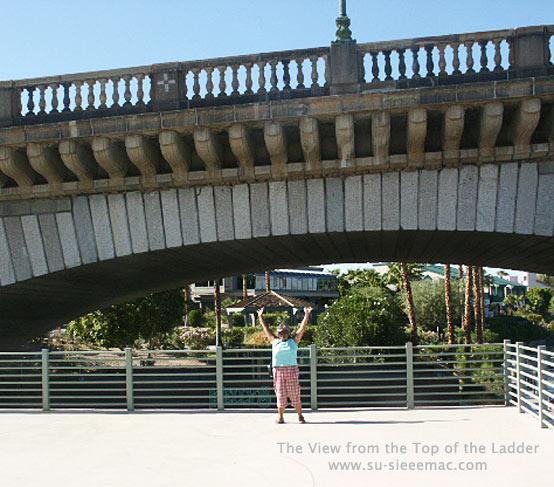 In the photo, I was posing so it looked like I was holding up the arch. Alas, I was too short. Giggle.

Click here to see what the L other bloggers are writing about for ABC Wednesday. Thank you, ABCW team!