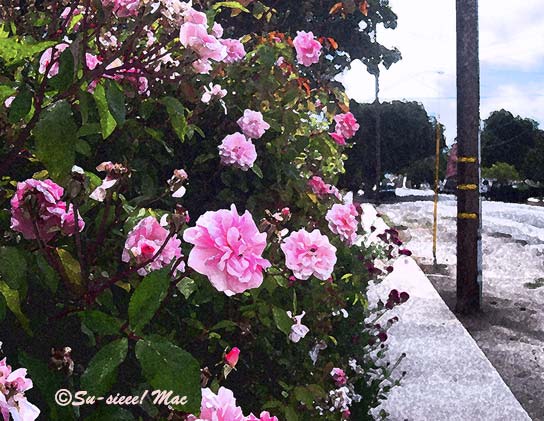 Paula sighed as she pulled back from her living room window. Curtis Warren, her middle-school English teacher from decades ago, had lost his wife to a drunk driver less than a year ago.  Paula heard that his family was concerned he would take his life. She knew the feeling. When her husband died from cancer five years go, Paula became a vagabond. She came back home a few months ago to be with her dad in his last days. She didn't know how much longer she would stay.

"Oh, no!" Paula rushed out her front door and down to the sidewalk where Curtis lay sprawled. She helped him up and held onto him until he was steady on his feet.

"My mind was thinking of other things," the 70-year old man said. His voice rough as if he hadn't spoken in a long time.

"It happens," said Paula. "Come up to my porch, Mr. Warren, and sit for a while. I have fresh lemonade."

"All right," said Paula. "Another time then, Mr. Warren. You're welcome to sit on my porch anytime you feel tired from your walk, whether I'm here or not. I always have lemonade in the fridge."

"You are very kind." He looked curiously at the 60-year-old woman. He said, "You were one of my students."

Paula nodded, grinning widely. "The first year you taught. I can now thank you." She reached out for his hand and shook it firmly. "Thank you, Mr. Warren."

"No need for that anymore," he said. "Call me Curtis."

*************
One morning,  a few weeks later, Paula sat on her front porch, drinking coffee and browsing the travel sites on the Internet.

Curtis stood at the gate, looking taller and stronger than he had at their previous encounter.

“Yes, it is.” He looked shyly down, then up at her with a hesitant smile. “I wonder if I might sit on your porch for a bit.”

“Of course,” said Paula. "How about a cup of coffee? And, perhaps a blueberry scone?”

“Thank you,” he said, walking up the pathway. “I would like that.”