September 23 was the first day of Autumn. It was also the Husband's and my 19th wedding anniversary. And, yes, it doesn't seem like it was that long ago we turned right at the xerox machine to get married. (For that story, head over here, if you like.)

Our day began with breakfast at our favorite coffee shop in San Juan Bautista—Vertigo Coffee. That's one of the few places I'll allow myself to drink coffee. The Husband had himself a mocha latte, which is an occasion in itself. Until yesterday, he hadn't drunk coffee in over two years. 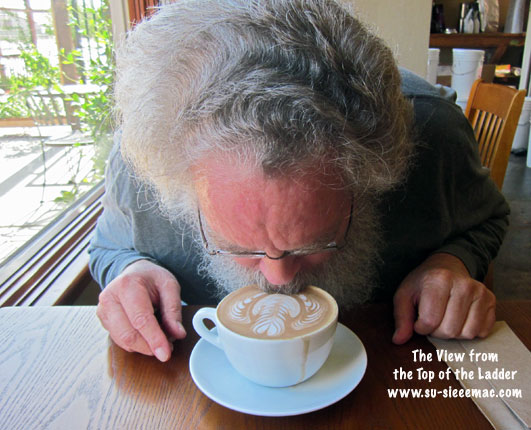 We also ate BLT with soft scrambled egg panini sandwiches. Yummm! Using coffee stirrers as chopsticks to pick up the eggs that kept falling out of our sandwiches made the meal even more fun and special. 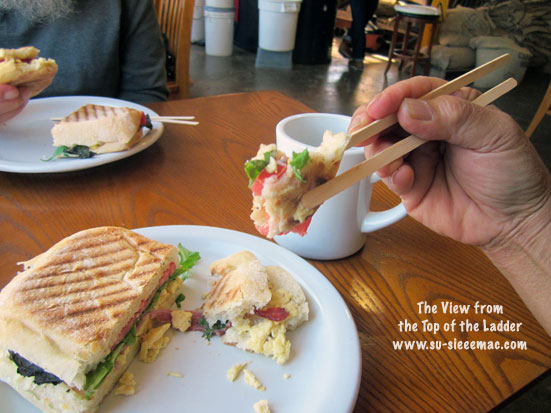 We drove over to the coast and headed north on Highway One. Roadwork was going on, but that didn't bother us. We were after all in no big hurry to get anywhere. We saw a lot of pampas grass growing alongside the road and hills. Did you know that pampas grass is originally from South America? I always thought it was from the east coast. 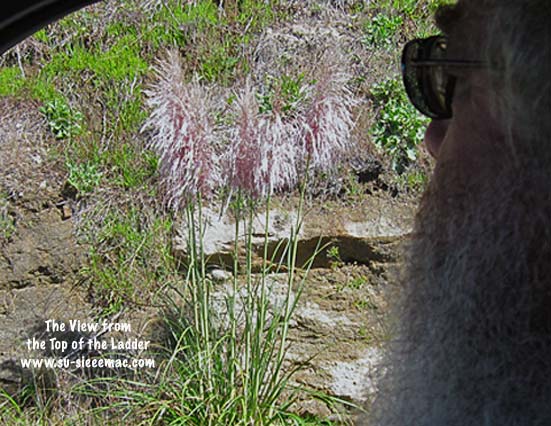 North of Santa Cruz, Highway One is a two-lane highway. It's a gorgeous drive, with the ocean on one side and hill and mountains on the other. Lots of farm land.  This time of the year, you can see quite a few fields full of bright orange pumpkins. I didn't get any photos of that, but I did get a photo of some trees in modern dance pose. 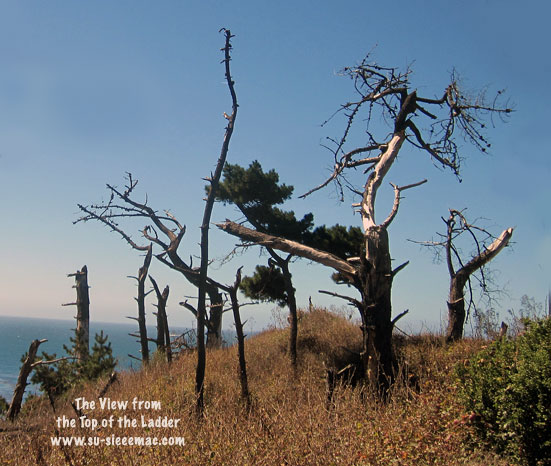 We stopped at Half Moon Bay, a cute little coastal town, to stretch our legs. We walked up and down the main street, window shopping and even wandered into a couple of them.  I posted photos of the various signs we saw on Main Street yesterday. 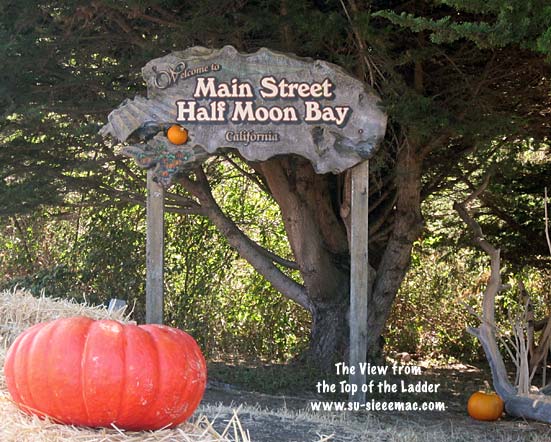 While I was taking a photo of the Husband pretending to ride a bike rack shaped in a bicycle, a woman stopped and laughed. "You've made my day," she said. "Let me take a photo of the two of you." 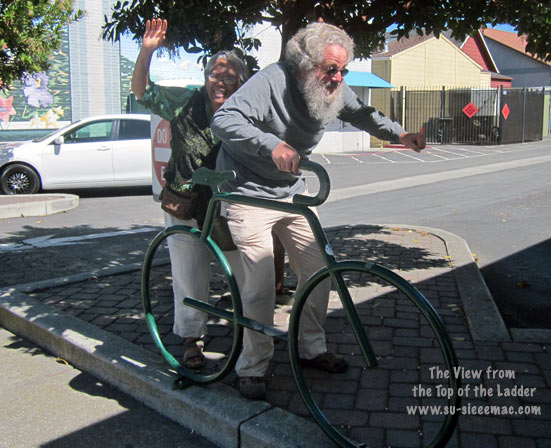 Our destination was Devil's Slide, about 17 minutes north of Half Moon Bay. Devil's Slide is a portion of Highway One that often got closed after heavy rains because of mudslides. After tunnels were drilled through the mountain to bypass this treacherous section, the road was turned into a trail. It opened in 2013. 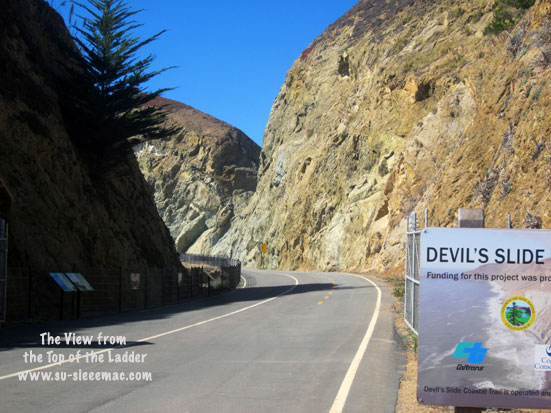 I think the last time I drove Devil's Slide was 20 years ago. As we walked the trail from one end to the other and back, I was astounded that people used to drive this stretch. I don't recall the driving lanes being narrow at all.

The trail isn't long, 1.3 mile one way. There are a couple of steep inclines. Going up them was fine. Going down, ouch. My left knee was a whining diva. She didn't cry though, so that was good.

Remember that the Husband drank a mocha latte several hours earlier for breakfast. As we rested on a bench after walking down the steepest incline, the Husband mentioned how quiet he had been. "You've been talking the whole time we've been walking," I said.

The Husband is so darn cute. 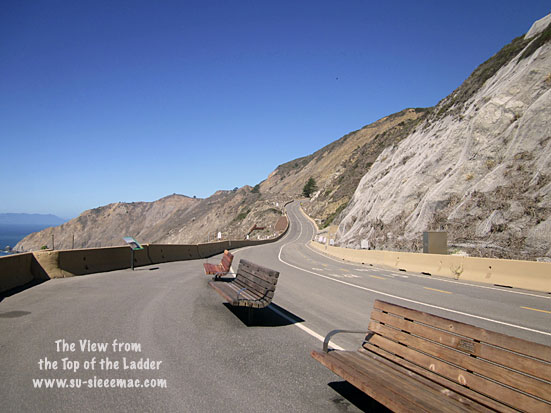 We kept coming across people who exclaimed, "There's a whale!" A whale just went under!" or "Did you see the whale?" They pointed to somewhere in the ocean, describing where to look. "See the white water. The whale is near there." The Husband and I didn't see a thing. 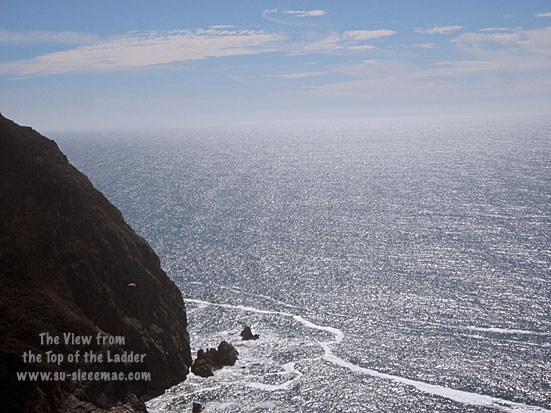 After driving through the tunnel twice, we headed back to Half Moon Bay for dinner. We also checked out Ocean Books, the used bookstore on Main Street that unfortunately is going out of business after 19 years. There's nothing like wandering around a small, charming independent bookstore with an eclectic selection. It was one of the things that both the Husband and I hoped we would get to do on our special day of wandering.

Dinner was at Café Capistrano, which specializes in Mayan food. A local told us about this hole-in-wall restaurant, two blocks west of Main Street. The Husband and I shared an appetizer and a dinner plate, a perfect amount as both were generous portions. The appetizer was a bean stuffed tortilla topped with Mayan coleslaw, pickled onions, and shredded roasted chicken. Yummm! Our entree was pork adobo (two pieces of thin, tender pork grilled in achiote and lime) with black beans, red rice, guacamole, Mayan coleslaw, and corn tortillas. Double yummmm! Mayan adobo is very different from Filipino adobo. 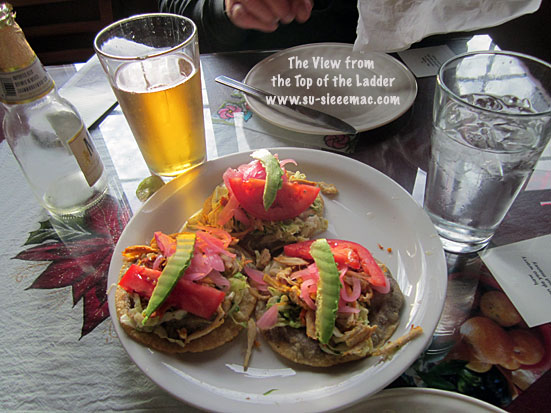 It would've been nice to have stayed overnight in Half Moon Bay. But, the Mama and I had doctor appointments the following day, so back home the Husband and I went, jiggity jig, with the sun setting into the ocean.

It's the letter S at Alphabe Thursday. (Yes, I know it's Friday.) This weekly meme is hosted by the amazing Jenny Matlock.  To check out other S posts, please click here.