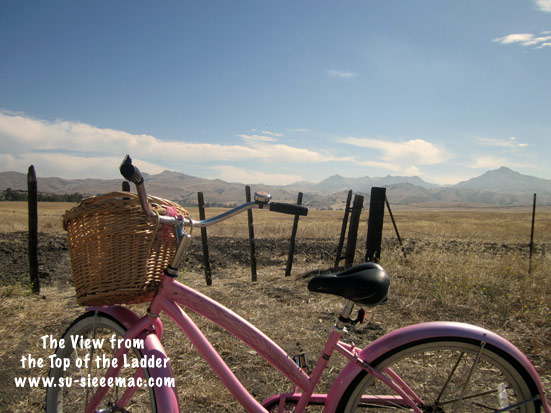 The butterflies cheered Tilda-Hilda and me on as we slooooooowly pedaled up the long inclines. They flitted alongside us, weaving among the wild mustard flowers on the side of the road. A couple of the crazy butterflies played chicken with us, flying at us and swerving away at the last second.

An old guy (probably a bit younger than me) was taking photos of birds in a faraway tree with a camera with a humongous lens. I stopped to talk to him, thinking he was one of the photographers who posted their amazing photos at a Facebook group I pop in now and then.

As we chatted, a woman in a red SUV pulled up beside us. "There's a wonderful picture around the curve to take. A deer is sitting beneath a bush. It's so cute."

"Thank you," we both said. She drove off. I got on Tilda-Hilda. "Sounds like a sweet picture. I'll skip. I don't feel like pedaling back up the hill."

"Good idea," the old guy said, heading to his white truck. "Better get going before it gets hot."

"Good for you for being out here. For trying."

I understood. How many old fat ladies pedal these hills on a pink cruiser? I know of one, so far.

"Have a good day," we said to each other. About a half mile down the road, the old guy passed Tilda-Hilda and me. I waved in case he was looking his rear view mirror. He waved back.

Tilda-Hilda and I had a satisfying ride. We pedaled just over 15.6 miles in 92 minutes, gradually climbing over 400 feet before heading back down.