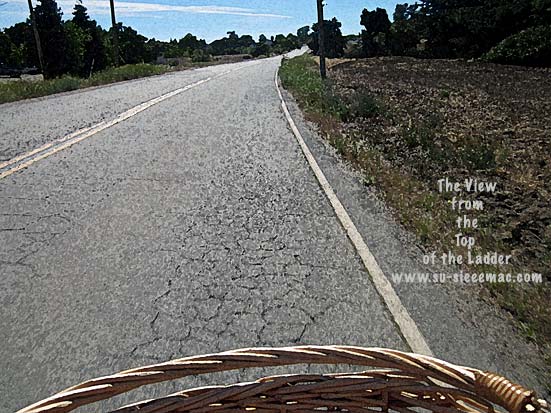 Tilda-Hilda took off later than usual this morning, because I was debating whether to take today as my rest day. I almost talked myself into skipping, but then I reasoned I would be rushing tomorrow as the Husband and I are going to see the air show at the airport. Hence, patient Tilda-Hilda and I pedaled off for a short ride.

So, I thought. Maybe if I didn't want to go up this hill (the one in the photo), it would've been a sweet, short, not-so-hard ride. But, then, no hard work, no healthy gain for me. Chug, chug, chug. I'm not a pretty pedaler going up hills. I gasp. I growl. I spit. I looked up at one point and saw a woman biker also pedaling a cruiser going down the other way. "Hello," I said. No response. She kinda had a disgusted look on her face. Oh-oh. She must've seen me spit. Oh well, as the Husband says, better out than in.

Anyway, we had another delightful work-out. Tilda-Hilda and I went about 9 miles in 49 minutes. By the way, I actually took the photo as I was pedaling. See ya.