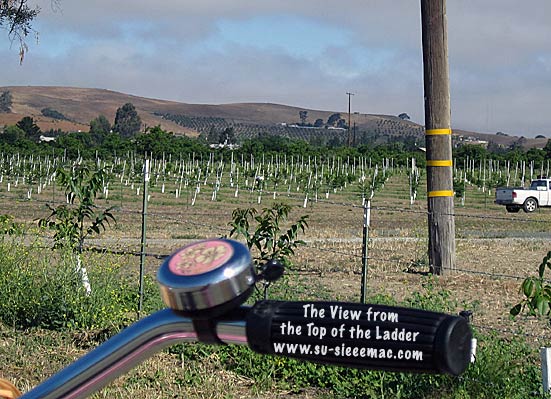 This morning Tilda-Hilda and I chased after the fog, but it rolled? flew? floated? faster than we could pedal. You can see some of the fog breaking over the low hills. It's heading back towards the Pacific Ocean, about 40 minutes away. That is, if it rides in a car. Can you imagine a bank of fog squeezed inside a car, say an oldie VW bug?

We rode about 10 miles in 55 minutes. I counted 15 hills. Some were slight and long. Some were very short, but steep. And others were in between. We definitely got a good workout.

For me, pedaling Tilda-Hilda out and about is better than a stationary bicycle. I pedaled one a couple months ago when I won a free weekly pass to a local gym. It was totally not my style, the stationary bike or the gym.  I tried nearly everything the gym had to offer—the treadmill, the row machine, the scary weight machines, boot camp, and zumba. The trainers and teachers were young sweethearts. They realized I was older and out-of-shape than I did. I enjoyed the zumba class. The teacher was into tweaking a lot, which was cracking me up by the end of the hour.

Eunice of A Tent, A Caravan, 4 Wheels & Me suggested a song for me—"Pushbike Song" by the Mixtures from 1970. Check out the video. It looks like it was made in Australia. I'm guessing the band was from down under. Do we ever say people are from up over?