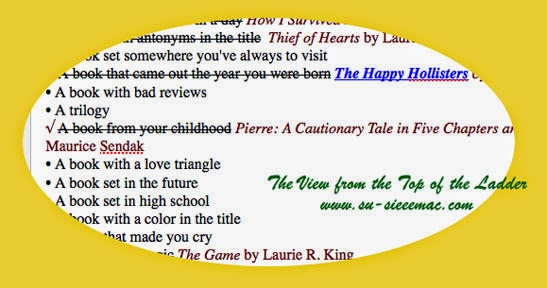 I love reading books. Writing book reviews, not so much. I tell myself it's good for me to write them for my 2015 Reading Challenge. Discipline and all that. Of which, I have been finding the time to read for pleasure more regularly. Yay! for that. Boo! though, as a couple of the books I've read don't fit any category. This may mean another level of discipline—finding books that do match the challenge categories. I'll think about it.

Anyway, today, I give you four reviews. Just so you and the FCC know: Should you click on the Amazon links and happen to purchase anything there, Amazon may reward me with a bit of change.

√ A book with magic

As I read The Game by Laurie R. King, I traveled back to the Flapper Age, wandering around India with 60-ish Sherlock Holmes and his much younger wife Mary Russell.  The couple was sent there by Mycroft, brother of Sherlock, to find the 50-ish missing spy Kim O'Hara, the once-upon-a-time young boy about whom Rudyard Kipling wrote.  Sherlock and Mary disguise themselves as traveling Beduoins, who do a little magic show wherever they stop. Along the way, they are "adopted" by a young boy who helps them complete their mission. They eventually head to an Indian kingdom bordering Afghanistan that is ruled by a rather eccentric and cruel man who has ideas of taking over all of India.

The Game is the seventh of 13 titles in King's Russell and Holmes suspense series. This is the third one that I've read and it won't be the last. I just love how Sherlock and Mary roll their eyes as people fawn over Sherlock and ask about the stories that Arthur Conan Doyle and Dr. Watson wrote about him. I've never been interested in reading the Tales of Sherlock Holmes, even after enjoying the movies with Robert Downey, Jr. and watching the TV series Elementary every week. But, after finishing The Game, I now want to read Doyle's books.

√ A book based entirely on its cover

Mrs. Kormel is Not Normal! by Dan Gautman is a fun, quick and easy read. It ought to be as it's the level between an easy reader and a middle school book. This book is part of Gautman's My Wierd School series, in which each title features one of the adults working at Ella Mentry School. Don't you just love the name of that school?

Mrs. Kormel is an Ella Mentry School bus driver who has her own secret language. When kids get on her bus, she greets them with "Bingle boo!" and when kids stand on their seats, Mrs. Kormel shouts at them to "Limpus kidoodle!" and they do.

The story is about the day that Mrs. Kormel and the kids go pick up a new kid somewhere off their normal route to school. Do they ever make it to school on time for show and tell, the math quiz, lunch, or the stuff after lunch?

√ A book from your childhood

Why did I let so many decades go by before reading Pierre: A Cautionary Tale in Five Chapters and a Prologue by Maurice Sendak? I love this very short tale that cuts to the chase so quickly, vividly, and, yes, enchantingly. The story is not unlike Aesop's The Boy Who Cried Wolf. That's all I'm saying.

I thought Glitter and Glue by Kelly Corrigan was a novel when I checked it out at my local library. A few pages in, I realized it was a memoir. Corrigan has breast cancer and to her surprise she can only find comfort in her mom. She's surprised because Corrigan had one of those classic love-hate mom-daughter relationships when she was young. Corrigan tells us about that relationship and how she came to realize how much she was like her mother when she worked as a nanny as a young woman in Australia. Corrigan wrote about her memories with humor and love.

√ A book set in a different country

The Vanishing Thief is the first book in Kate Parker's series A Victorian Bookshop Mystery. I enjoyed it so much that after I finished it, I promptly searched the web for the next title, which ought to be in my mailbox in the next 10 business days.

The story is set in the latter years of the Victorian age in London. Georgia Fenchurch, the main character, owns a bookstore that she inherited from her parents who were murdered over 10 years ago. Georgia has vowed to find her parents murderer and, wouldn't you know it, after 10 years, she has sighted the murderer on a bus. Finding her parents' murderer is the subplot.

The main plot is finding a missing man who has managed to mingle with the upper class even though he is not. Georgia does her investigation as part of a secret group called the Archivist Society, which is known both by the London police force and the well-to-do. There are an interesting bunch of twists and turns to the tale, including the fact that the missing man has been blackmailing several upper class families. There is also a handsome duke who may have abducted the missing man and who is attracted to Georgia and she to him. He reminds me of the Beast in the Beauty and the Beast. Maybe they'll kiss in the next book.