I Am the Mama's Daughter 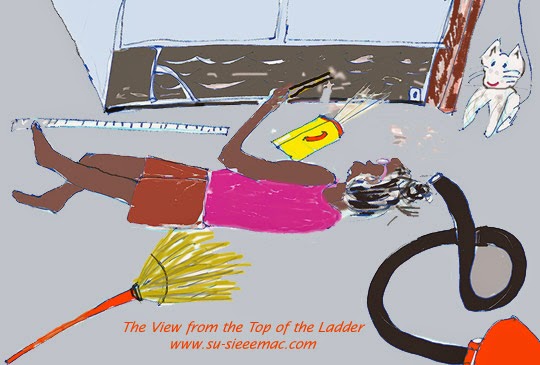 "How do other people clean their refrigerator coils?" I asked the Husband as he walked through the kitchen. I was laying on my side, looking at thick globs of dust clinging on the coils.

"The vacuum cleaner can only reach so far."

"Use a yardstick." Sigh.

Earlier yesterday morning, the Mama asked me, "When are you going to vacuum the refrigerator coils?" Sigh. I thought I'd done it six months or a year ago, but the way time flies, it was probably two years ago.  I need to wash the kitchen floor soon, so I figured I might as well deal with the coils first. It would only take 10 minutes.

Ha! Maybe it would've, if I had not gone and fetched the big yellow flashlight and shined it on the coils. Sigh. I had to make some kind of effort to get at those globs of dust. Not that the Mama would get down on the floor and inspect my job. That's something she can no longer do. Getting herself down on the floor, that is. I want to go on record here that I'm no spry chicken myself.

Half an hour later, I was still laying on my side on the kitchen floor. Behind me laid a useless broom and the vacuum cleaner, while the yardstick that the Husband got for me laid ready by my side.  I finally found a good tool for scraping, pulling, and picking out the dust. Chopsticks!  I'll have you know that I used my left hand, and I'm right-handed.

Every time I thought I was done, I made the mistake of shining the flashlight on the coils. After the second time, I realized my persistence and stubbornness were like the Mama's. I only quit when I hit something that I shouldn't have.  That's okay. The coils are clean enough for another year. Or two.

By the way, the opening to the refrigerator coils is narrower than it looks in the above drawing. A lot more!