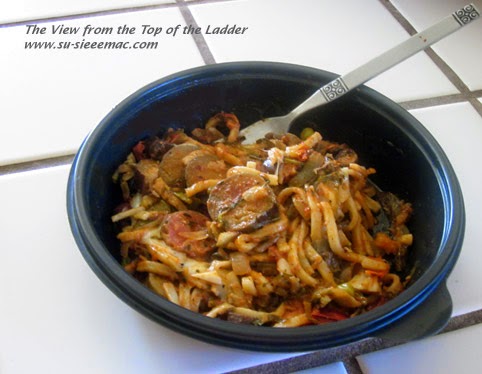 The other night, I made the kind of red pasta sauce for which I have been hankering for the longest time. Hurrah! The photo shows the leftovers I ate for breakfast.

Getting that "perfect" taste was by accident so I have no idea if I will be able to do it again. Booo!

I'm one of those people who likes to read cookbooks but modifies recipes while cooking and doesn't pay attention to how things are being changed. I also rarely measure amounts, and, when I do, I'm eyeballing amounts. That's probably why my chemistry experiments in school usually failed. Ha! on the person who copied my answers.

Ingredients I Prepped
How I Cooked the Sauce

Saute the onions for a couple of minutes, then add the mushrooms, garlic and chives. Stir. A minute later, add the defrosted tomatoes. Stir. A few minutes later, add the eggplants. Stir. A minute later, add dried basil and black pepper. (I don't add salt because the Husband is on a low-salt diet.) Let it all simmer for about 5 minutes, gently stirring now and then to make sure the eggplants get cooked in the juices. Finally combine the sausages with the concoction. Continue cooking for another 5 minutes, stirring to make sure nothing gets stuck on the bottom of the pan. That happens to me a lot. (Note:  If the sausages weren't precooked, I would have added them after sauteing the onions.) Oh, at the last minute I threw in less than a handful of leftover snap peas.

I served the dish by first putting a layer of noodles on the plate, next a slice of provolone cheese, then a layer of the sauce.

The Husband told me what he thought about the dish before I could ask. "Yum," he said. "This is like eggplant parmigiana."

Molly the Cat turned away from a sampling, but she did give it a good sniff.