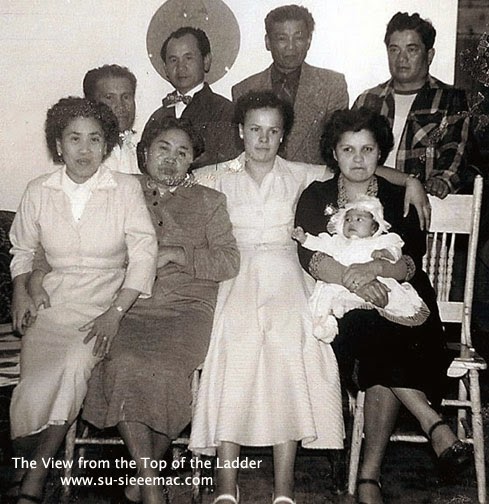 The Mama and the Daddy asked six of their friends to be the ninongs and ninangs, or godparents, when I was baptized.  The Roman Catholic Church recognizes only two baptismal sponsors, and one ninang (female godparent) and one ninong (male godparent) did sign on the formal lines of the baptismal document a long time ago. The other four signed on the right hand top of the page. I have a feeling the godparents signed it all at once at the church, which makes me wonder if the priest panicked that the church rules were not being followed.

The parents taught me that the spouses of the godparents were also ninangs and ninongs, and I was to address them as such. Altogether, I had 10 godparents. I have many memories of these elegant people. Here are a few of them.

Ninang Deling taught me my numbers in Ilocano. She was quite patient with the four-year old me that bounced and danced around her as I repeated after her—maysa, dua, tallo, uppat, lima. . .

When I was six or seven, Ninong Cleto and I drove in his boat of a car to the store for candy. As I selected candy bars, he asked for the 3-foot tall doll sitting on the shelves up high. This doll had tits and wore heels and a fancy blue glittery gown. The Mama thought it too pretty to play with, but its hair still got shorn and its dress torn.

I think the late afternoon/early evening phone calls from Ninang Babe started when I was in middle school. Usually a bit tipsy, she called to tell me how much she loved me. She talked about other stuff, but I only understood that she loved me. Our family didn't say "I love you" to each other back then. It was a given. Yet, for a kid, it's nice to hear the words, even from a godmother who by then I had no idea what she looked like.

In 1975, a friend and I decided to drive cross country after the spring term was over. The parents did all they could to discourage me. The idea of two young women driving, unchaperoned, across the United States was a foreign concept for them. What if your car breaks down? What if you meet bad people? What if you run out of money? And so on and so forth. I started to get anxious and thought maybe I shouldn't take the trip. Then Ninong Pablo dropped by the parents' house for a visit. "I hear you're going to drive across America," he said. I nodded. The Daddy had probably called him to come over and advise me.  "You're going to have a great time,"Ninong Pablo said.

And, then, there was Ninong Frank. The last time I saw him was in a supermarket parking lot. He was heading towards his car, while I was heading into the market. As always, he gave me his version of a big smile and eventually asked how old am I now. When I told him that I was in my 40s, he was quite startled. "Oh, well," he said, pulling out a five-dollar bill from his pocket. "Here. Buy yourself a doughnut."