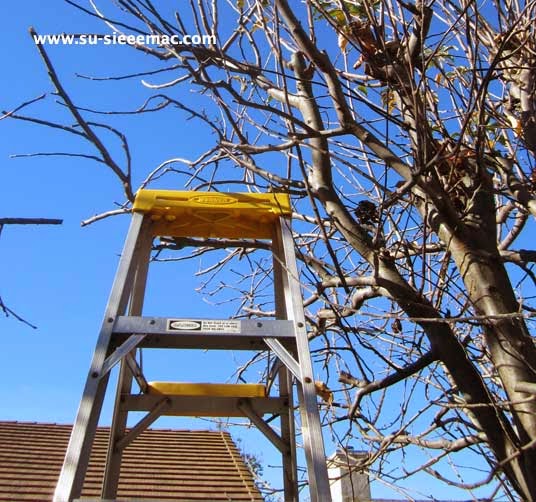 Okay. So, I changed the name of the blog, from Don't Be a Hippie...Then and Now to The View from the Top of the Ladder. Will a new name get me to write regularly, or just write? We shall see, dear Readers.

I haven't written in a long time. Anything. No, that's false. Occasionally, I write short articles for moolah, and  I post at Take 25 to Hollister, with the goal of doing it everyday for a year. But, until this moment, I haven't said anything about my intent there. I just post. I'll know on January 7, 2015, if I have accomplished my goal. A second time.

This is the fourth blog title change for me. The last three times, I started a new physical blog. This time, I realized whatever for. My writing voice hasn't change. Neither have the topics that I  write about because there is nothing new under the sun, including my "writer's block" that has been going on  for more than several months. Possibly years.

Some would say that I don't have writer's block because I continue to write.  But, for one who used to be constantly dreaming up, working, and completing on book projects, I know something is not right with me. The words that come to mind are unfocused... no passion... creative drought. Also, whining.

When I was still fresh at writing, hundreds of years ago, I read The World According to Garp, by John Irving, who is one of my favorite authors. At one point in the story, Garp gets writer's block. He couldn't and wouldn't write. I couldn't believe Garp's listlessness and inability to write. I thought back then that writer's block does not exist. Ha! Youthful arrogance. I can't recall how Garp shifted back into being a write, so, maybe I ought to read the story again and get a clue.

I look at this name change as a positive move for myself. After all, I have become more confident about climbing up ladders this past year. A task that I have taken up so that the nonagenarian who is the Mama does not.