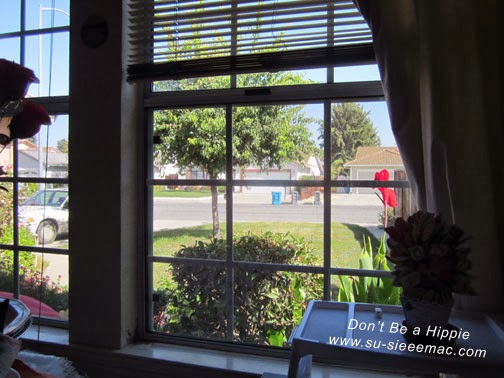 "Su-sieee!" the Mama called from the bottom of the stairs.

"Su-sieeeeeeee!" She shouted two seconds later. I had only begun to get my head out of whatever I was writing.

"Hold on. Hold on." I called as I stumbled down the hallway to the stairs. "What is it?"

Halfway down the stairs, the Mama held up a bottle and asked, "Do we have Windex?"

"Windex?"  I immediately envisioned her standing on the highest step of the tall ladder to clean the windows from outside. I peered at the label over my computer glasses. "This is Windex."

Oh, God, I thought. Will she ask me to go to the store now? Can I get her to use vinegar instead?

"Windex comes in different colors now," I said. "This has lemon in it."

"Okay," she said, taking the bottle from me.

"What are you going to do?"

"Too many spots (which she pronounces a-spots a-spots)," she mumbled. "I can't stand looking at them anymore."

"Here, let me do it," I said, reaching for the bottle.

"No, no, you go do your work," she said, not letting go of the bottle.

"I can do it," I said. Surprisingly, she didn't continue arguing.

For the next half hour, I did my best wiping away a-spots a-spots on the windows that she gazes through every morning as she peacefully eats her breakfast.

It was quite satisfying to do, I tell you what.