Another Year of Picking Tomatoes with the Mama 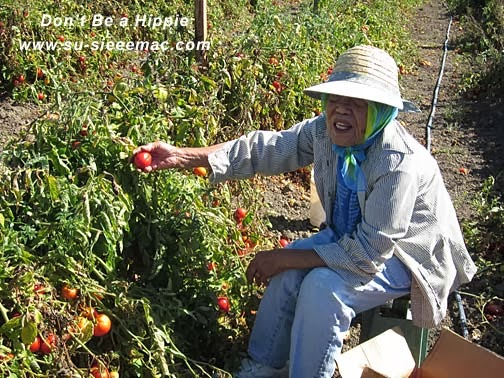 That's how many pounds of tomatoes the Husband, the Mama, and I picked at the Live Earth Farm in Watsonville yesterday.  The farm was having its last u-pick day for tomatoes, and, we were quite fortunate to learn about it just in time.

I have gotten spoiled. Maybe the Husband and the Mama have, too. For the last four years, we have picked enough organic tomatoes to freeze and use until the next tomato season. Frozen organic tomatoes taste almost as if they were just picked. That's reason one for me saying I am spoiled.

Reason number two is that I like seeing Mama enjoy herself as she picks tomatoes. I think it brings her back to the days of working in vegetable seed research. We bring her little green bench so that she can sit as she pick tomatoes in solitude under the warm sun. "Don't go too far," she always tells me, as I go to find my own row of solitude nearby, while the Husband walks toward the far end of the field.

I didn't think we would be picking tomatoes this year. The farm that we usually go to wasn't planning any public U-pick days. The Mama was very disappointed when I told her. So, I searched the Internet for organic farms in nearby counties and came across Live Earth Farm. She thought it was too far to go for tomatoes. "Just buy them at the store," she said. "It's the same price."

"$1.00 a pound. You can't get a better price for organic tomatoes," I said, already deciding to go whether or not the Mama accompanied us.

At the last second, the Mama decided to go with us. She doesn't like to travel much anymore, and she was quite a grumpy traveler, especially when we got lost finding the place. But, all was well after she plopped herself on her little green bench and plucked the first tomato off the vine.

When we hauled our boxes to the scales, she said, "Ask the farmer if he needs workers. We can come work for him. How much do you think he pays?" Before I could answer, she said sadly, "He won't hire me. I move too slow."

I don't know about that. She picked 24 pounds of tomatoes on her own. That's pretty darn good for a tiny 90+ year-old-woman.