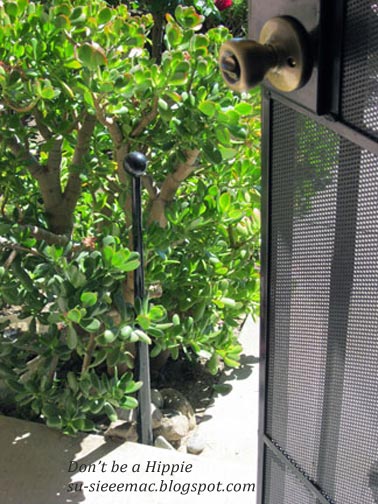 A cane is a very useful tool. It helps you steady yourself as you stand up. It offers you support as you make your way down your path. It's also something you can point with and you can use it to hit a car (or person) that comes too close for comfort.

Yep, a cane is a useful tool.

The Mama, however, will have nothing to do with one. She says (not these exact words, but this idea), "The more you use a cane, the more you won't be able to walk on your own." I suppose, in her mind, a cane is proof that you've given up to old age.

Fortunately, when she works in her gardens, she turns her rake or broom upside down and uses it kind of like a cane. But, she's not really using a cane, you see, because she's just transporting the rake or broom.

All in all, the Mama is very strong for a frail-looking woman in her 90s. (Don't let that fragility fool you. The woman is pretty much all muscle.) By using a cane, the Husband and I would have false confidence that all would be all right as she moves about. But, that's not a battle worth fighting right now. Instead, we look for unobtrusive ways that may help her, and that brings me to the black pole, which you see in the above photo, thanks to our two amigos, Pal D. and Buddy M.

Pal has generously made it his mission to put up things, such as railings or grip bars, that will help Mama get in and out of the house with ease. And, again, the key point, is that those things be essentially unnoticeable as being helpers for the Mama. So, the first project was putting up something by the front step for the Mama to hold onto as she goes up and down it.

When  Pal told  Buddy about the project,  Buddy offered a heavy, metal black pole that was once attached to a weight scale for fat people. That's how the Buddy described it. A very big person holds onto the pole to steady himself (or herself) as he (or she) gets on the scale. The Buddy said that he had that pole for more than 30 years. He figured that one day, the pole would come in handy. So, it did.

Pal brought the pole over to see if it might work. We figured that by attaching a wooden base to it, the pole would be the perfect height for the Mama.  "Keep in mind," I said to the Pal, "It may take a couple of years before the Mama will actually use it." I didn't want him to be disappointed.

A few weeks later, the Pal gave me the final product. "If it doesn't work, or she doesn't like it, that's okay," he said. "We'll try something else."

Several days later, the Husband and I installed the pole. It merely required digging a hole deep enough to firmly hold the pole in place. When I showed it to the Mama, I could see the annoyed look that says "I don't like that you are reminding me that my body is old." It quickly disappeared when I told her the history of the pole and how much Pal and Buddy wanted to give it to her so she could use it to help her whenever she wanted.

I could see the Mama's body take on a smile. Then I left it at that. I did not nag her to use the pole as she went up and down the step, nor did I ever ask if she  used it. So unlike me.

About three weeks ago, I watched the Mama hold onto the pole as she stepped down and then later on reach for it to help her step up. A very natural act. I was amazed.