Walking on the Ancient Ocean Floor 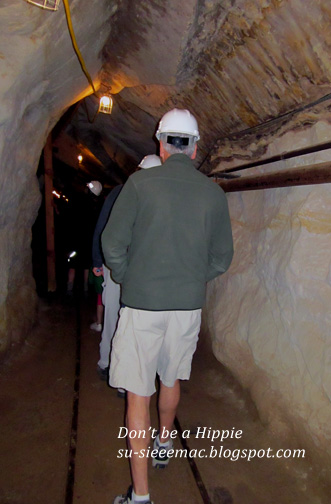 A couple weeks ago, some of us young "old fogeys" took our merry selves to the Black Diamond Mines Regional Preserve in Antioch, California, about 45 miles northeast of San Francisco. This park overlooks the Carquinez Strait, an estuary of the San Joaquin and Sacramento Rivers, which drains into the San Francisco Bay. It is a beautiful place to picnic, hike, and check out nature.

Once upon a time, hundreds of millions of years ago, the area was under an ancient sea. And over millions upon millions of years, wondrously wonderful earth changes built up the sandstone hills as well as crushed living matter between layers of rock to form black diamonds. During the last half of the 19th century, the Black Diamond mines were the largest coal mines in California, and from the 1920s to the 1940s,  white silica sand was mined out of the sandstone hills for the Hazel-Atlas Glass Company in Oakland.

We, young "old fogeys" took a tour of the Hazel-Atlas Mine that afternoon. With our hard hats on, we walked, and climbed a bit, through over 900 feet of the underground mine. We stood in a "room" larger than a two-story house that had been dynamited over and over to scoop up tons of white silica sand. We stopped on wooden bridges, built by park workers, to gaze up and down at other levels of the mine. Every now and then we saw things that looked like square plaques on the walls. Ha! They are not plaques but 6 or 8 foot bolts that are holding up slabs of sandstone walls. Gulp.

For me, one of the most staggering realization was the notion that we were walking on ancient ocean floor. In one part of the mine, one side of the tunnel showed evidence of ancient tidal movement, while the other side was embedded with tiny fossilized sea critters.

And, then there was that part of the tunnel where we stood and looked at a fault in the wall. Yeah, as in earthquake. Mind blowing.

To learn more about the Black Diamond Mines Regional Preserve, check out this link. And, here are links to two articles by writers who have explored the park and taken the Hazel-Atlas Mine tour.