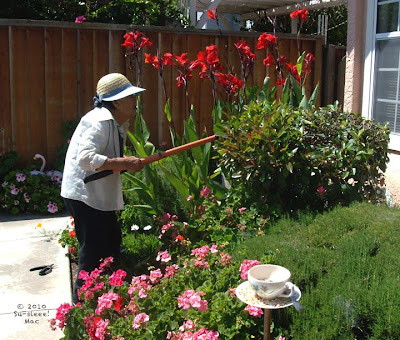 A loved one gets too old to cut her (or his) toenails. That same elderly loved one who can still drag a nine-foot ladder across the backyard and prune a lemon tree, when no one is looking.

In my case, that is the Mama.

Of course, there is the Mama's reason. She'd rather buy a 50-pound bag of wild birdseed. I agree. More value for the money.

So, yes, I cut the Mama's toenails.

The first time was last summer. I happened to come across her sitting on the patio, with her foot up on a stool. Her various nail clipping tools spread out beside her. She was muttering frustrated curses at her toes.

I offered to cut her toenails.  At first, she resisted.

"It's no problem," I said, hovering over her.

"It's this big toe. The cuu-coo hurts at night," she said. Cuu-coo (I don't know how it's spelled) is the Ilocano word for toenail—and fingernail, for that matter. It's pronounced like cuckoo in cuckoo bird.

"I can do it," the Mama said, quite plaintively.

At that point, I could've left her alone and gone back upstairs to work. But,  my concentration would be interrupted by wondering how she was doing. The Mama has difficulty asking for help. My difficulty is gauging whether to leave her alone or ignore her and start pitching in. That afternoon, I pulled a chair in front of her and picked up a nail clipper.

"Just the big cuu-coo," she said, with what sounded like relief in her voice. Of course, I ignored her. I trimmed them all.

"I can cut your toenails for you," the Mama said, as I clipped slowly away at a particular thick cuu-coo.

"I used to cut your father's cuu-coo all the time."

The Daddy had a cataract in one eye and during his last several years, he no longer drove after dusk.  It should not have surprised me that the Mama trimmed his nails. But, it did. I wonder if the Daddy came up to her one day with the nail clippers and asked her. Or, like me, she happened upon him being frustrated at not seeing the fine details.

I also wonder if she chitchats about things, especially stuff that happened in the Philippines long ago, while she clipped the Daddy's cuuu-coo just as she chatters away while I clip hers today. The Mama isn't much of a talker, so her yakkity-yakking was quite surprising. But, then, I recall being 18 years old and one of my godfather's and his niece had just left after a long visit. The mama said to me, quite surprised, "I did not know you could talk a lot."

Every six weeks, more or less, the Mama asks me to trim her toenails. I can count on her saying, "Would you like me to do your cuu-coo? I used to cut your father's cuu-coo all the time." As I clip away, I can also be sure of her telling me stories about stuff that happened to her in the Philippines long ago.

I enjoy clipping the Mama's toenails. I think she does, too.