January 05, 2012
Neither the Husband nor I are pack racks. Not much, that is. He still has one or two boxes of college textbooks, and I have a box, or two, of research from the mid-70s about Filipinos in the United States for a book idea that has been on the back burner since, well, at least 1979, the last time I was living full time in the hometown.

Surprisingly, we had no problem filling in the space. Quickly, too.

It just goes to show how cramped we both had been living in our homes for many years.

Out of the boxes came the prized possessions: Books! Almost immediately, they were complemented with books from the collection of the father-in-law. Three bookshelves worth. The bookshelves came with the books. The Father-in-law was in the process of getting rid of some of his stuff to make room for his bride-to-be's belongings in his home. He, the Father-in-law, was very attached to his books, so he was very happy that we wanted to adopt them.  So, yep. We could've easily opened a comfy used bookstore in that house. 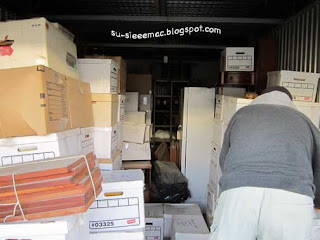 We still can. Open a used bookstore, that is. Only this time out of a storage locker. Today, most of the Husband and my belongings are shrink-wrapped or boxed and hanging out in the Mama's garage and in two storage lockers. I would say the majority of the boxes are full of books.

When we moved to the hometown, we stored our boxes and such in the Mama's garage. Several months later the Father-in-law unexpectedly died.  Because the all-of-a-sudden "evil" (her words, not mine) stepmother decided to sell the family house, the Husband and I packed nearly 50+ years, and several generations, of stuff and transported all over 100 miles to two storage lockers in the hometown.

Now, several years later, we are finally tackling the stuff. All of it. Everything happens in its own time. Our goal is to consolidate locker stuff into one locker and to see more of the Mama's garage floor by the end of the month.