I've been feeling muddle-headed lately. Too many brain lapses. Quite a lot of pressing of the delete button. Sigh. So, bear with me, dear readers, as I ramble forward to clear my mind with random thoughts. 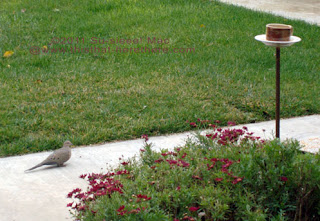 Random thought number one. Big birds (maybe the doves) splatted big time on the side of the car and the driveway. Very rude! Especially since we leave bird seeds out every day.

Random thought number two. The husband got a surprise check for $100 yesterday. It was part of a cash settlement in a class action law suit against a large drug distributor that was alleged to have set drug prices wrongfully high. The husband had no idea it was taking place. The company settled rather than go to court because it would be cheaper to pay $350 million today. In settling, the company does not formally admit to wrongdoing. That part is what always astounds me about corporations that get away with crime.

Random thought number three. I have publishing deadlines over the next two years. I hope I can maintain blogging at the same time as I write about occupations in aviation, law enforcement, education, and engineering. Ouch, my brain!

Random thought number four.  I borrowed a friend's sewing machine a month ago. It's still sitting on the hope chest in the hallway unused.

Random thought number five. Yesterday, the mama harvested a banana blossom, as she was cutting the dead leaves from the banana plants. She said that it was protected by the dried leaves so it hadn't frozen. Amazing!

Random though number six. I really appreciate the husband making morning coffee and washing dishes. With his finger in stitches, I've had to do his chores. Only a few more days to go.

Random thought number seven. The tiny birds (maybe sparrows) are frolicking in the front yard as they fly from feeder to feeder to fence to tree to the neighbor's shrubs where they're nesting. Their singing fills the air. We are blessed!

So, am I feeling less muddle-headed? The noggin does feel a little bit lighter, thank you very much dear readers for being a captive audience.

I'm participating in the Follow Friday 40 and Over meme, sponsored by Java at Never Growing Old.  Click here to check out what other bloggers are writing today.