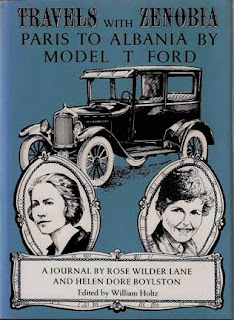 Travels with Zenobia, Paris to Albania by Model T Ford, A Journal

by Rose Wilder Lane and Helen Dore Boylston, and edited by William Holtz.

This book is the journal kept by two friends who travel from Paris to Albania.  This is a true story about two women in 1926.  Rose Wilder Lane  was a well-known author of the times, who later would become known as one of the founders of the libertarian movement. You, dear readers, may also know Rose as the daughter of Laura Ingalls Wilder, the author of the Little House on the Prairie books. Rose's friend, Helen Dore Boylston, known as Troub, was also a writer, but during this time frame she was still learning her craft. Have you ever read any of the Sue Barton, Nurse series? They were written by Troub, who served as a nurse in WWI.

Zenobia is the name of the Model T Ford that Rose and Troub bought in Paris. Buying the automobile was easy, but getting it out of the showroom was not. It took about 6 weeks for them to get the proper paperwork and plates before they could legally drive it on the streets of Paris. Once they did, the women were on the road to Albania where they had rented a house. The women wrote about their daily travels through France and Italy in a journal for Rose's parents. Their different writing styles complimented each other. When each wrote about the same day or incident, I felt like I was getting a fuller picture of what Rose and Troub experienced.

While they were traveling through Italy, they were often asked if they were Germans. It was near the end of their time in Italy that they learned the reason why. Back then, only German women traveled without men in their parties. No doubt, it must've been unusual to see two independent women driving a brand-new car through Italian villages. I would think that would've been the case anywhere in the world at that time. Maybe still so today in some places.

The book was a fun read. I always like getting lost in time with real people.  I was glad that Holtz, the editor of this book, added an introduction to prepare me into the world of Rose and Troub, as well as an aftermath of sorts to give me a sense of their time in Albania. On my arbitrary scale of 1 to 5, I would give this book a 4.129.
Book Challenges
This title fulfills these 2011 reading challenges in which I'm participating. They're both still open, if you're interested.