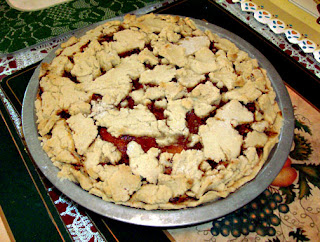 The other week, I said to the mama and the husband that I would make an apricot pie for dinner. Then added, "Maybe." Just in case I couldn't.

"Where are you going to get the apricots?" the husband asked.

"I took a bag out of the freezer yesterday." I was sure they were apricots and not persimmon. We still have a few bags left of last year's harvest in the freezer. Of course, none of the bags have labels. Like almost everything, baking can become an adventure for me.

Flour. I had less than a cup of unbleached white flour. At least I thought it was wheat flour. For good measure, I threw in a handful of garbanzo flour and another handful or so of brown rice flour to make 2 cups. Two-crusted pie was what I wanted to bake.

Shortening. I used coconut oil. I cut it into the flour until everything was nice and crumbly. Then I added 1/4 cup of ice cold water. Dry. I added another quarter cup. Dry. Another quarter. Still dry. By then I suspected I didn't have any wheat flour in my mix. In went another quarter cup. Finally, something that looked like pie dough.

Fruit. Guess what? That wasn't a bag of frozen apricots. They were persimmons. I had never made a pie out of persimmons. What was a gal to do?  I poured the persimmons into a bowl. I also diced an apple and threw it into the bowl for good measure.

Spices and other stuff. 1/3 cup of brown sugar. Maybe 1/3 to 1/2 cup of tapioca pearls. Then as much cinnamon, nutmeg, and allspice, or was it cloves, that I felt like shaking in.

"The crust is dry," said the husband, as he kept on eating.

"She put a lot of decoration on the pie," said the mama, as she kept on eating.

Surprisingly that persimmon pie had the same consistency as pumpkin pie. The taste reminded me of pumpkin pie, probably because of the spices. I'll make persimmon pie again. Maybe, I'll add walnuts.