What I'm Not Reading Now 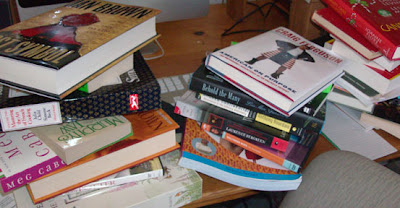 Today, I moved all but one book from my nightstand because the dust collecting on them was bothering me. I mean a lot of books...and a lot of dust! Some books have been waiting patiently for years for me to crack them open. Bookmarks peek out of other books to show that I abandoned them after only several pages or a few chapters for various reasons. I have very good intention to return to each of these books. Some day.

The Octopus: A California Story

by Frank Norris. I aim to re-read this book. It's a novel about the ruthlessness of big agribusiness in California at the turn of the 19th century. Much of the story is set in a fictional place based on San Benito County where I was born, raised, and now live again.

by Anne Perry. Another novel I want to re-read. It's part of a series about a detective, whose regaining his memory, and his wife who solve crime in the mid-19th century. Perry is one amazing writer. She's able to bring the sights, smells, and noises of those times alive.

Under the Tuscan Sun

by Frances Mayes. I waited a long time to see the movie on which this story is based because I thought it would be schmaltzy-yucky. Ha! on me. I liked it so much I want to read the book.

Top-Secret Personal Beeswax: A Journal by Junie B (and me!)

by Barbara Park (and me, of course). This book came out when the character, Junie B, was in first grade. The Junie B series is one of my favorite kid series. The kid is hilarious.

by Lavon J. Dunne. I don't know how many times I've looked for that book in my cookbook, health, and how-to piles. It's an easy-to-read, easy-to-understand book.

by Sharon Turner. Still can only do one basic stitch. But I think I can do advanced stuff with the help of this book. It's just finding the yearning again to knit.

about Miss Potter for my birthday a couple years ago. First time I ever read Potter's works. Her drawings are full of wonder. The stories are kind of strange, which I like.

Over the Edge of the World

by Laurence Bergreen. A book about Magellan's trip around the world. I hope it's as good as the title makes me feel like reading it.

by Anthony Bourdain. His writing voice is consistent with what you see on his TV program.

by Sharon Tyler Herbst. Cooking tips. Really should go down into the kitchen bookcase.

by Dan Brown. He wrote this before The DaVinci Code. I find this book hard to read. Even started reading it backwards to no avail.

by Charlotte Bronte. I read the abridged version in high school. Seeing the movie

version with Toby Stephens (sigh) last year enticed me to get a copy of the book.

My Life in France

got me interested in learning more about Julia Child, the person. I'm halfway through the book.

by Jerry West. It was 50 cents at the local thrift shop. That was enough incentive for me to read it.

by Lois-Ann Yamanaka. She is one of my favorite novelists. Her stories are about locals living in Hawaii.

by Joanne Fluke, Laura Levine, and Leslie Meier. Three novellas by three different mystery authors. I've read Fluke's so far. The three amateur detectives are also cooks. What sold me on this book is the fact that recipes are included.

by Michael Crichton. A couple of Christmases ago, the husband and I decided that instead of buying a present, we each would choose one of the books from his or her shelves that he or she had read and liked and give that to the other to read. He hasn't read the one I gave him either.

Pswhew. Are you as tired reading my list as I am writing about it? Here are the other books in my nightstand pile:
So, what book have I left on the nightstand? Going Rogue: An American Life by Sarah Palin. I'm finding it hard to read, which is ironic since the author has presented her story and ideas simplistically. I've told myself that I can't read anything else for fun until I'm done with it. And, there's a new mystery by Anne Perry that's coming out soon.