Still Waiting for that Martini 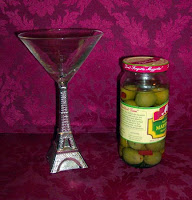 We bought a bottle of martini olives

so we could celebrate the coming of 2010 in the comfort and safety of our home. I make a decent gin martini, according to the husband. However, he's still waiting for that Happy New Year martini.

This is the second bottle of olives that we bought in the past six months with good intentions of drinking ourselves silly. Who wouldn't with such cute martini glasses from which to sip. (Ha! No dangling prepositions by which to chide me, Husband.)

So, what are we doing with the martini olives? Mostly, I use it as an ingredient in what's-in-the-fridge concoctions. Because they're salty, I usually use one or two. Today the olives became part of a steak marinade. Here's what I did:

First, I prepared and put these ingredients in my marinating bowl:
Next, I added these ingredients (Note: These are all "about" measurements):
Then I combined everything and had the husband taste it. "Yum," he said. "It has a bite to it."

The meat has been sitting in the marinade for several hours now. We might have it tonight or tomorrow for dinner. Maybe, I'll make some martinis, too.